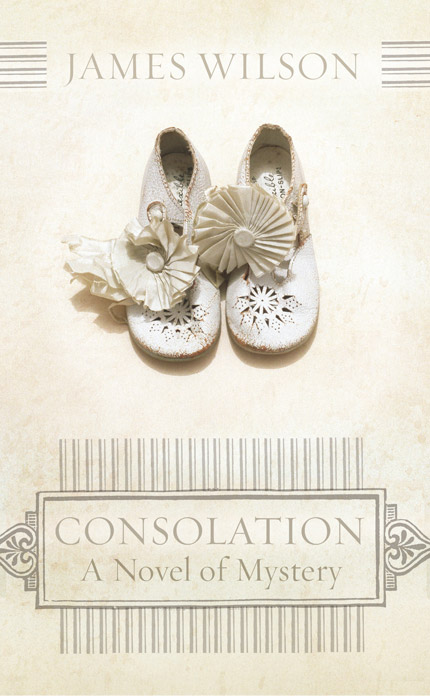 It is 1910 and Corley Roper, a famous children's author, is mourning the death of his young daughter. Estranged from his wife and wracked by grief, he happens one night upon Mary Wilson, who is mourning her own still-born son. No longer able to enter into the fictional world that made his name, and haunted by the ghost of this other lost child, Roper sets out to solve the mystery of Mary's ancestry, a journey he hopes will bring consolation to them both.

Taking as his starting point the tragic story of his own grandmother, James Wilson masterfully weaves fiction and family history into a powerful novel about grief, love and the redeeming enchantment of literature itself.

'Wilson's previous novels have shown his skill at creating characters who occupy a plausible past. He is equally good here, with his lovingly detailed Edwardian world and the certainties of its inhabitants. As author and reader know, time is running out for them. The book is beautifully written, too ... '
The Independent

'Consolation is not a heavy, depressing book. Rather, it is well written, with a pleasing balance of tenderness, depth and intelligence. It offers quite sumptuous food for thought ... James Wilson's style of writing is just up my street, with vivid descriptions of scenery — the sublime romance of the English countryside — but not overdone. He evokes the right amount of empathy for Roper, but cleverly understates the chasm of grief he feels, rather alluding to it in a subtle way that somehow magnifies it more than if it were thrust in the reader's face. He provides the skeleton for his psychological frame of mind, and the reader fills in the blanks — most satisfying. A brilliant read.'
The Witness (Book of the Year choice)

'Beautifully written and absorbing ... Wilson's characters are convincing period creations, not only in their speech and attitudes but in the solid-oak feel you get from authors such as Somerset Maugham and John Buchan. This is a world that will soon be blown apart by the First World War, but its certainties are barely dented ... At the heart of Mary's parentage is as nasty a tale of seduction and betrayal as any in Henry James ... Wilson has a gifted, original voice. His insights into human life — the uncertainties of both love and writing; the near-lunacy both cause — will please a sensitive reader and tease an impatient one.'
The Daily Telegraph

'This novel's acute psychological force resides in disorientating and misleading the reader as much the confused protagonist about what is true and what is mere mental aberration. James Wilson movingly shows how much madness may lie in losing the things we most love.'
The Independent on Sunday

'Drawing on the history of his own family and blending it seamlessly with fiction, James Wilson brings a century-old story to life through the compelling evocation of Corley's voice, as well as painstaking attention to the detail of the period. The result is an animated, haunting and surprisingly uplifting novel.'
The Observer

Here is the text of a short article I wrote about the book.

I was conscious, growing up, of a mystery about my grandmother. I did have a few tantalizing details about her early life: she was illegitimate; she never knew either of her parents; she had been brought up in Paris, in her own household, with servants and a governess, but no family, either real or adopted. Why she should have been treated in this way, though, I had no idea. And while I did know her mother's name, I had only the haziest notion (which turned out to be wrong) about who her father was.

My few memories of her, of course, come from the other end of her life. I recall an intelligent, lively woman, who showed great affection towards me and my elder brother. But she was also given to outbursts of unappeasable rage and suspicion: I vividly remember her asking me, when I was five, what other people said about her, and the terrible storm that erupted when I told her. She died a few months later. But her sense of alienation and rejection lived on, first in my father, and then — through him — in my brother and me. Like a lot of lonely children, I took refuge in reading. Only much later did it strike me that many of the books I loved were classics from my grandmother's own youth, like The Wind in the Willows and The Story of the Treasure Seekers. It was in that sudden flash of insight that the idea of Consolation was born.

With the help of a genealogist friend of my mother's, I began to try to piece together the truth — or as much, at least, as was still discoverable after such a long time — about my grandmother's birth and upbringing. It was an extraordinary journey, starting with the Times report of a sensational divorce case in 1881, and leading me into the world of a large, secretive Victorian family — immensely wealthy, riven with jealousies and insecurities, and peopled by an extraordinary cast of characters: horse-racing indigo planters; cricket-playing missionaries; a Deputy Opium Agent in the Indian Civil Service. For all the strangeness of this landscape, though, I kept stumbling on odd coincidences: the house we had ended up living in in Bristol is less than two miles from where my grandparents met; my mysterious great-grandfather was born in Normandy, where we have a holiday cottage — and when my wife and I visited his birthplace, Avranches, we found still more strange echoes there.

But there was still a gap in the middle of the picture: the great-grandmother who had abandoned her bastard daughter at birth and refused ever to see her again. I was approaching the moment in the book where she was due to appear as a character; but — despite all our efforts — she still remained what she had been all my life: no more than a fairy-tale embodiment of heartlessness and malignity, without feeling or individuality.

And then, by a wonderful piece of serendipity, I received — more or less out of the blue — a huge package, from a distant cousin whose existence I had never suspected (and who had never suspected mine) until the genealogist had tracked her down. Inside was a treasure-trove of material: birth- and wedding-certificates; pages from family albums; and sheaves of photographs — not only of my great-grandmother herself (I couldn't help sensing, in her expression, a continuing defiance of my attempts to find her), but also of the legitimate family she had gone on to have after my grandmother was born, and of the house where they lived. It was enough to give me a way into her world, and to allow me to write the tragedy of my grandmother's birth from her point of view with — I hope — real understanding.