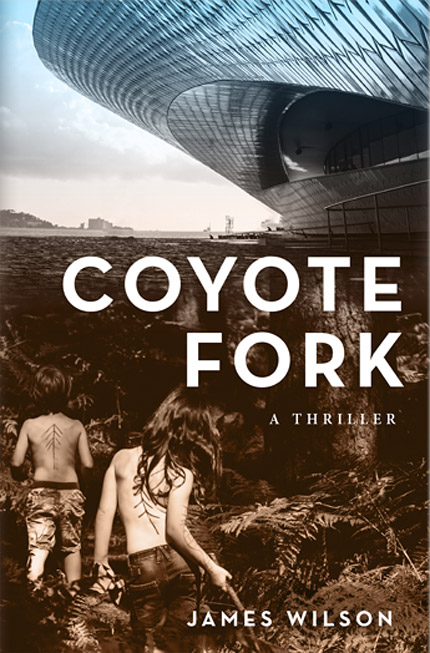 My sixth novel, Coyote Fork, was recently published by the excellent Slant Books.

A thriller, it sends its British narrator, Robert Lovelace, on the trail of a missing woman, the one-time girlfriend of Tech titan Evan Bone. At one level, it’s a California detective quest, in the vein of Ross Macdonald or Raymond Chandler. But at another, it’s a journey through the Internet-era landscape, exploring the consequences – predictive algorithms, mass surveillance, cancel culture – of the reductionist philosophy at the heart of Silicon Valley.

“An excellent novel. Could hardly be more timely. I can’t get over how thrilling and smart it is.”
Rod Dreher, author and columnist

“An astonishingly good thriller, which also speaks of our times: the increasing dominance of the online world, our divorce from nature… but at its core an exceptionally taut story.”
Alec Marsh, author of the Drabble and Harris series

“The best new thrillers include…A special mention for James Wilson’s Coyote Fork: A Thriller (Slant Books), a disturbing chiller about a social media giant called Global Village and its creepy, predatory founder Evan Bone. The novel is an insightful take on modern life, including the viral nature of online hatred.”
Martin Chilton, The Independent (November Books of the Month)

“A classic thriller for the post-modern age.”
News Journal

“Couldn’t be more zeitgeist. A thought provoking read which questions our relationship to the online world, AI and its effect on the future of human interaction with technology.”
Paul Burke,  Crime Time website

“A slickly effective, tightly-written neo-noir that successfully reimagines that genre’s fatalist vision of human depravity into the no less cynical era of social media.”
Tara Isabella Burton, author of Social Creature: A Novel

“Coyote Fork is like a Ross MacDonald novel for the 21st century: exciting, hard-boiled and fast-paced, but profound and philosophical too. It’s such an acute analysis of our contemporary situation, where vicious scapegoating can parade as inclusivity, and technological utopianism can enable delusional despotism. There’s real metaphysical depth to the questions it raises about our rooted past and our greatly-threatened future – but at the same time it’s an incredibly exciting, page-turning read, full of sharp dialogue and great characters. A stunning achievement.”
Tobias Jones, author of The Salati Case, Blood on the Altar and Utopian Dreams

“A superb thriller.”
Derek Beaven, author of Acts of Mutiny and Newton’s Niece